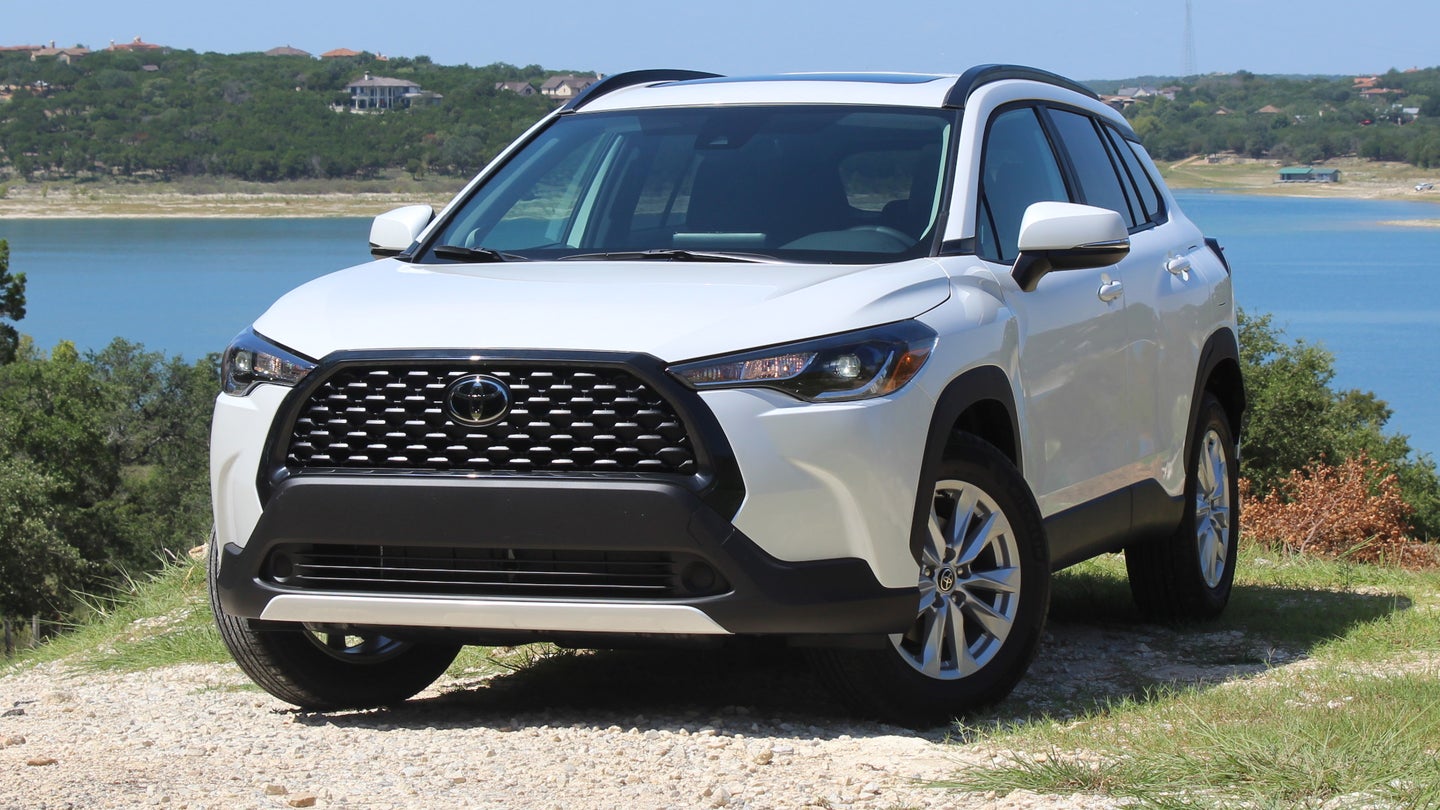 The Toyota Corolla Cross debuted in the United States in June this year and will be available in Toyota stores throughout the nation beginning in October 2021. The Corolla Cross is only offered with a single-engine choice and is built in the United States at the new Mazda Toyota Manufacturing factory in Huntsville, Alabama, which has the capacity to build up to 150,000 units per year. Not to mention, that gives our dealership in Tuscaloosa a good advantage for getting our hands on this model. When the crossover was unveiled three months ago, the company promised that a hybrid engine will be available later.

Despite its familiar Corolla moniker, the Cross is more than a standard small hatchback thanks to its SUV form and higher ride height. The Cross version's external design was based on the Corolla, but it was altered to give it a more crossover-like vibe. The car's ride has been improved, and the majority of the parts have been given a more aggressive appearance. The company should also be commended for combining the interior with a body style that is so organically suited to the SUV category. Unlike the sedan, the Corolla Cross has just one engine option. Not to mention, this model is the first-ever Corolla Crossover!
The 1.8-liter four-cylinder engine with 139 horsepower is not available for the crossover. Only the 2.0-liter four-cylinder engine with 169 horsepower and 151 pound-feet of torque will be available to customers. In terms of fuel efficiency, it's the same as last year's model. For the coming year, a hybrid engine, potentially with all-wheel drive, will be added to the Corolla Cross' range.

One engine, a 2.0-liter gasoline engine with 169 horsepower (126 kilowatts) and 150 pound-feet (203-newton meters) of torque, is available for use in either the front wheels or both axles of the vehicle. Powered by a continuously variable transmission, the CVT may transfer power to either the front wheels or all four wheels. It features a shift mode that enables it to be held at exact ratios manually.
The Corolla Cross has a towing capacity of up to 1,500 pounds and a ground clearance of up to 8.2 inches, making it an excellent choice for off-roading. Regarding handling, the Corolla Cross is substantially closer to its rivals than it is to the competition. This vehicle's multi-link rear suspension performs far better than the front-drive model's torsion-beam system, resulting in improved rear-end stability across a variety of terrains.

If you're looking for something more basic, the XLE is the vehicle for you. Leatherette upholstery is included in the XLE along with all of the usual safety features, front seat warmers, and a fourth USB port in the rear. Leatherette upholstery is a must-have for anybody who hates the look of cloth seats. The larger 8-inch touchscreen (available on LE and XLE variants) has a smaller influence on the driving experience than the driver display located in front of the wheel.
Because of the XLE's greater aesthetics and layout, this feature is 7 inches diagonally, compared to 4.2 inches on the L and LE. It is also 7 inches longer than the L and LE. The XLE's temperature management mechanism is also much better than those of the competition. Dual-zone climate control is now available in the redesigned center stack, which puts the controls that regulate the fan and temperature into a more comprehensible configuration for drivers.

Sleek Design of the 2022 Corolla Cross

Taking a look at the front of the crossover, it's clear that it was inspired by the Corolla, but there are a few unique elements that give it a more confident appearance. In this case, the black grille is a little wider, has chrome surrounds, and is flanked by LED lighting that matches the black body parts, which is a common manner used by Toyota crossovers. The rear end is also a touch out of the ordinary, thanks to an integrated rear spoiler and LED illumination. Wheels ranging in size from 17 inches to 18 inches will be offered, depending on the specification level. The wheelbase of the Cross is also shorter than that of the sedan: 103.9 inches vs 106.3 inches in the sedan.

On the Inside of the 2022 Corolla Cross 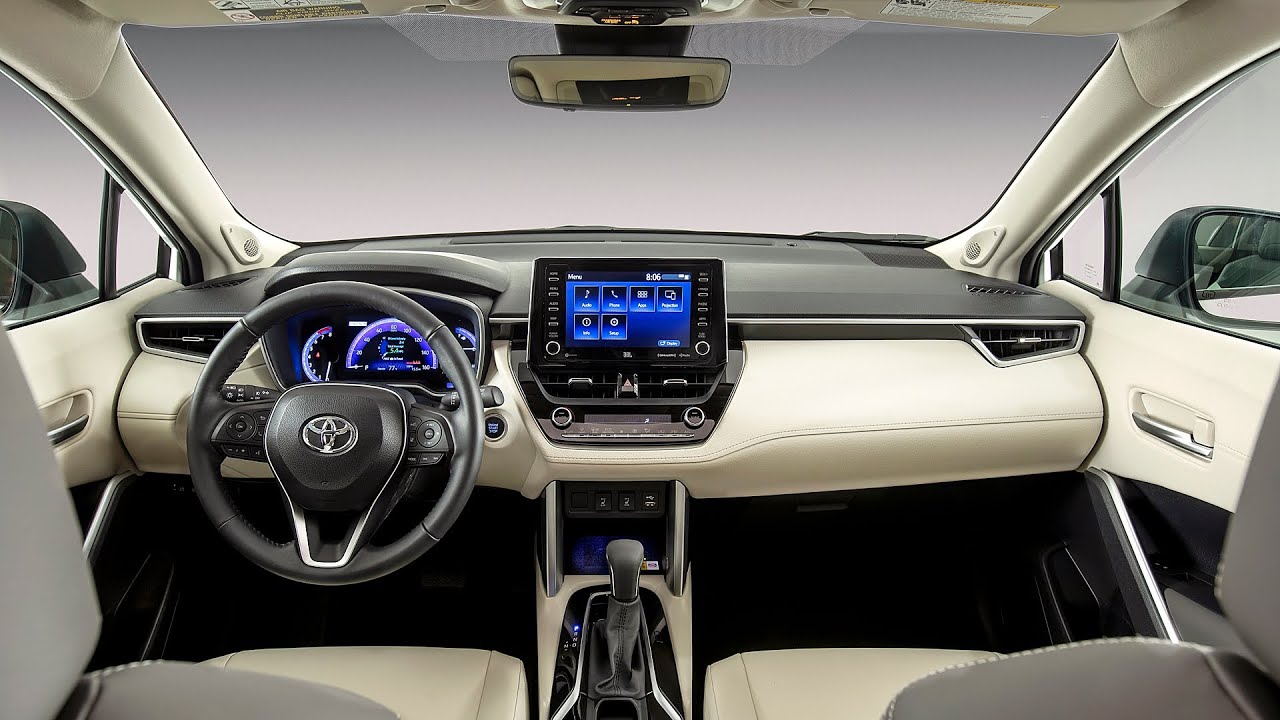 In addition to the power moonroof and single- or dual-zone controlled climate control, the Corolla Cross will be available in 2022. A choice of textiles is available for the seats, depending on the trim level: Light Gray fabric for the L version, Light Gray or Black fabric for the LE version, and Macadamia/Mocha or Black fabric for the XLE version. This trim level includes attractive faux-leather upholstery, heated front seats, a leather-wrapped shift knob, and a center armrest that can be folded down to accommodate people in the back seats. The larger dimensions of the Toyota Corolla Cross in 2022 give additional room for passengers, particularly in the back seat, as well as better cargo capacity for the vehicle.

The Corolla Cross's dashboard is transformed into a square infotainment display that is encircled by shortcut buttons. There are a number of recent Toyota automobiles equipped with 7.0- and 8.0-inch displays that have this arrangement. The Corolla Cross is equipped with the most up-to-date version of Toyota's infotainment system, which is very user-friendly and intuitive to use. All models will be equipped with Apple CarPlay, Android Auto, and SiriusXM satellite radio as standard features, while wireless smartphone charging, rear-seat USB charging outlets, and a JBL audio system will be offered as optional extras. The interface establishes a quick connection with almost any smartphone and delivers on its promises.

Toyota's present practice of standardizing driver-assistance technology is carried over to the Corolla Cross, which provides a bundle of technologies across all trim levels, continuing the company's current strategy. A pre-collision system with pedestrian and bicycle recognition is standard on all trim levels, and it will automatically stop the vehicle if it detects an impediment ahead and no response from the driver.
Toyota's TSS 2.0 suite of advanced driver-assistance safety technologies is available on all trim levels. Active steering, lane departure warnings, lane-centering assistance (Lane Tracing Assist), road sign recognition, and adaptive cruise control (as previously mentioned) are all included in the package. The XLE receives additional features such as rear cross-traffic braking, front and rear parking assist with automatic braking, and blind-spot monitoring with rear cross-traffic alerts, while the LE gets these features as well.

If you are interested in this new Toyota model, now is the time to act so that you can get your hands on one. Dealerships around the country have submitted orders to get these new models in and with the recent shortage in the automotive market, you're going to want to act fast to ensure you can get one of these models. If you are located in Alabama, contact us today and we will start working on getting a 2022 Corolla Cross ordered for you and shipped to our lot. Please fill out the contact form below for more information!